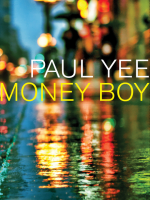 Ray Liu knows he should be happy. He lives in a big suburban house with all the latest electronic gadgets, and even finds plenty of time to indulge in his love of gaming. He needs the escape. It's tough getting grades that will please his army veteran father, when speaking English is still a struggle. And he can't quite connect with his peers at high school -- Chinese immigrants like himself but who seem to have adjusted to North American life more easily.

Then comes the fateful day when his father accesses Ray's internet account, and discovers Ray has been cruising gay websites. Before Ray knows what has hit him, his belongings have been thrown on the front lawn, and he has been kicked out.

Angry,defiant, Ray heads to downtown Toronto. In short order he is robbed, beaten up and seduced, and he learns the hard realities of life on the street. Could he really sell himself for sex? Lots of people use their bodies to make money -- athletes, actors, models, pop singers. If no one gets hurt, why should anyone care?