The Septembers of Shiraz »

The Septembers of Shiraz 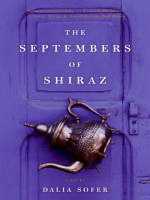 In the aftermath of the Iranian revolution, rare-gem dealer Isaac Amin is arrested, wrongly accused of being a spy. Terrified by his disappearance, his family must reconcile a new world of cruelty and chaos with the collapse of everything they have known. As Isaac navigates the terrors of prison, and his wife feverishly searches for him, his children struggle with the realization that their family may soon be forced to embark on a journey of incalculable danger.