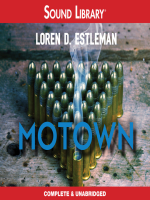 It's
1966 and Detroit has entered its Golden Age. America throbs to the throaty
rumble of Motor City's powerful road-eating machines. It'll never be this good
again, and Big Auto is fighting to keep it that way. Ex-cop Ricky Amery is
hired to go undercover to put the brakes on runaway consumer advocacy that
would legislate Detroit right out of business. They couldn't have chosen a more
loyal disciple. Amery's god is horsepower, and his house of worship is the open
road.

Meanwhile,
the rattle of automatic weapons fire sweeps the streets as the mob fights a
rear-guard action against a union president and the ruthless street gangs that
rule the black community, led by Quincy Springfield. It's in the middle of this
free-fire zone that Amery finds himself paying the price for his obsession with
four-wheeled thunder. Will he sell himself out? Or will he drop a match in a high-octane blend of race, violence, greed,
and corruption?

The
city has reached critical mass, and there's no time for decline and fall. When
Detroit blows, she's going in a mushroom cloud—every bloodstained block, all at
once.