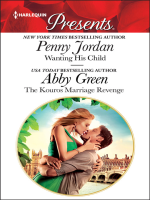 Silas Stevens broke Verity Maitland's heart when he married another woman. But meeting him again, and his motherless young daughter, she's wary of the passion which still burns between them. Could there be a place for Verity in this little family and in Silas's bed...as his wife?

When Greek shipping magnate Alexandros Kouros weds Kallie Demarchis, media photos show them madly in love. But behind the happy scenes lies a different story... Kallie married Alex to save her family's business! And he'll have great pleasure taking revenge for the mistake that destroyed their youth, by claiming her as his arranged bride!