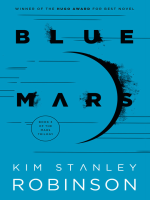 Description
The red planet is no more. Now green and verdant, Mars has been dramatically transformed from a desert world into one where humans can flourish. But as Mars reaches its final transformation, Earth is in peril. A great flood threatens an already overpopulated and polluted planet, and Mars, its last hope, may find itself facing a population explosion or an interplanetary war. Meanwhile, the First Hundred settlers of Mars are being pulled into a fierce new struggle between the Reds, a group devoted to preserving Mars in its desert state, and the Green terraformers.
Also in This Series