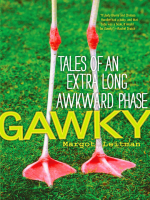 Some tall girls grow up to have perfect posture and are later seen gracing the pages of magazines. Some are natural athletes with toned legs that mask their overlarge feet. Then there are other tall girls: the ones who are always tripping over themselves; who never look normal in any size of clothing; who literally don't fit in.Comedian Margot Leitman was one of these awkward giants, and Gawky is the painfully funny chronicle of her experiences growing up tall. Reaching five feet six inches in fourth grade—and approaching six feet in high school—Leitman realized early on that she'd always stand out from the crowd. To cope, she developed a thick skin and a sharp sense of humor, and instead of forever trying to blend in, she decided to embrace her center-of-attention status. Leitman wears funky, Ziggy Stardust-era jumpsuits (in the 90s); takes up any cause she can find (whether saving the public beaches or protesting prom); and generally makes as much use of her big presence as humanly possible.Leitman's memoir is a hilarious celebration of growing up gangly. Endearing and encouraging, Gawky is a cathartic release of everything awkward girls endure—and a tribute to a youth larger than life.