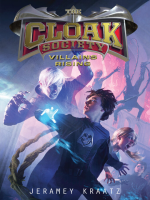 Alex Knight struggles to find a place between superheroes and supervillains in this explosive sequel to The Cloak Society, which School Library Journal says has "the same wide appeal as Rick Riordan's Percy Jackson books."

The Cloak Society has just pulled off the greatest takedown in Sterling City's history—but twelve-year-old Alex Knight has turned his back on the supervillains who raised him, and is fighting for the other side. Working with the superheroes is easier said than done, though . . . especially when your new teammates aren't sure your days as a villain are over.

Praised by Publishers Weekly for its "rapid-fire, comic book–style action," the Cloak Society trilogy delivers high-stakes battles, extraordinary superpowers, and an original twist on the superhero stories readers know and love. Fans of the 39 Clues and the Alex Rider Adventures will be hooked!