The Face of Battle »

The Face of Battle: A Study of Agincourt, Waterloo, and the Somme 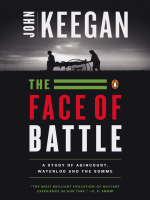 Military historian John Keegan's groundbreaking analysis of combat and warfareThe Face of Battle is military history from the battlefield: a look at the direct experience of individuals at the "point of maximum danger." Without the myth-making elements of rhetoric and xenophobia, and breaking away from the stylized format of battle descriptions, John Keegan has written what is probably the definitive model for military historians. And in his scrupulous reassessment of three battles representative of three different time periods, he manages to convey what the experience of combat meant for the participants, whether they were facing the arrow cloud at the battle of Agincourt, the musket balls at Waterloo, or the steel rain of the Somme."The best military historian of our generation." –Tom Clancy