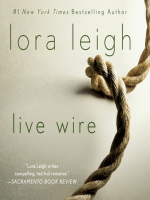 Description
"A hero among men, meet Captain Jordan Malone. For years he has been a silent warrior and guardian, operating independent of government protocol or oversight, leading his team of Elite Ops agents to fight against terror at all costs. A legend in the field, Jordan's true identity has remained a mystery even to his own men, until now. A magnet for one woman, Tehya Talamosi, codename Enigma, is a force to be reckoned with. A woman this striking spells nothing but trouble for Jordan."--P. [4] of cover.
Also in This Series