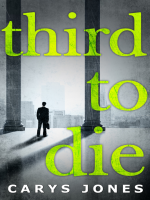 Aiden Connelly has settled in to life in Avalon and is developing a reputation as an attorney who will fight for the truth ... no matter what enemies he makes along the way.

But when he is asked to look into the tragic death of an old friend ten years before, Aiden is drawn back to his hometown of Greensburg, the town he eagerly fled as a teenager. As the ghosts from Aiden's past resurface, and new dilemmas rise up to challenge him in Avalon, Aiden begins to wonder if everything he holds true has been built on lies.

Fourth to Run - out now!