The Coldest Night: A Novel 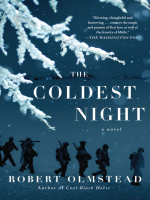 From young love to the Korean War, a boy's coming of age is wrought with shattering trials in this "riveting, thoughtful and . . . harrowing" novel (The Washington Post).
A Publishers Weekly Best Book of the Year
Henry Childs is just seventeen when he falls into a love affair so intense it nearly destroys him. To escape the wrath of the young girl's father, Henry joins the Marines, arriving in Korea on the eve of the brutal battle of the Chosin Reservoir—the defining moment of the Korean War. There he confronts an enemy force far beyond the scope of his imagining, but the challenges he meets upon his return home, scarred and haunted, are greater by far.
From the steamy streets of New Orleans to the bone-chilling Korean landscape, award-winning author Robert Olmstead takes us into one of the most physically challenging battles in history, as well as an electrifying, all-consuming love affair.