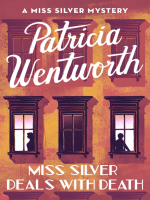 Vandeleur House was great once. The home of a prominent court painter, its ballroom and parlors hosted the brightest of the Victorian era. Now divided into eight flats, it is an apartment building whose glorious façade conceals a nest of diabolical intrigue.

There is Maude, a young woman who was crossing the Atlantic when her steamer was struck by a Nazi torpedo. She survived; her husband did not. Then there's Ivy, a sleepwalking maid with a curious past. And last there is Mrs. Underwood, a snobbish woman dreadfully embarrassed that she is being blackmailed by another resident. And all that drama in just one flat. There are many secrets in Vandeleur house, and it will take the full force of gentlewoman detective Maud Silver's intuition to unravel them.