Using Terri: The Religious Right's Conspiracy to Take Away Our Rights 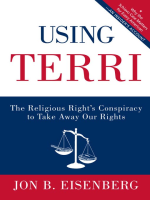 The Terri Schiavo case was a key battle in a larger political struggle over abortion, stem-cell research, physician-assisted suicide, gay rights, and the appointment of federal judges. The religious Right chose to make it a national spectacle because they thought they could win. They were wrong. But there are many more battles to come. Jon Eisenberg, who served as one of the lead attorneys on Michael Schiavo's side, exposes the religious Right's strategies and follows the money trail to reveal how they are organized, who is funding the movement, and where we can expect future legal maneuvers to combat the American traditions of autonomy and freedom.

Jon Eisenberg has experienced the family struggle of removing a feeding tube from a loved one and witnessed firsthand the Florida drama that will continue to have national legal and political consequences for years to come. What tactics can we expect to see in courtrooms and state legislatures all across this country in the days ahead? Who is behind the funding and what do they hope to accomplish and when? What are the religious and bioethical issues that are at the center of these debates and how will they affect future legal battles? Using Terri gives us a behind-the-scenes look at what happened -- and what's coming.