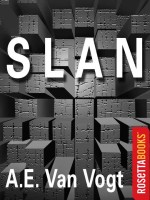 Description
"Fans are Slans," became the catchphrase of early science fiction fandom in the wake of this novel. Like the Slans - telepathic mutants hiding out in a hostile population - science fiction fans considered themselves a haunted special minority, imbued with transcendent and visionary insight, sure to prevail in the fullness of time. Communes were called "Slan shacks" and fans occupied them. In the wake of the atomic bomb and theories of atomic mutation, the premise of SLAN seemed ever more credible.

There are two kinds of Slans - those whose tendrils publicize their power to read the minds of ordinary humans and so-called tendrilless Slans whose strange power is concealed (allowing these Slans to hide). The tendrilled Slans were exterminated in a pogrom a while ago; now human society is ruled by the dictator Kier Gray who promises to locate and eliminate the tendrilless Slans. Johnny Cross, a young adolescent, is a secret Slan who in the novel's opening scene is fleeing with his mother, pursued by a human mob. The mob assaults and kills his mother, who dies charging Johnny with the responsibility to confront Kier Gray in his palace and destroy him so that the Slans may live.

The novel is the narrative of Johnny's odyssey through the Slan sub-societies and toward his final confrontation with Kier Gray. In Gray's palace lives the young, beautiful Slan, Kathleen Layton,who Gray spared from a mob so that a Slan and her powers could be investigated at close quarters. How Johnny finds his way past Gray's defenses toward that confrontation and what he shockingly learns from that meeting embody the point of the novel and the heart of Van Vogt's novelistic technique.