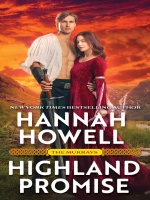 Description
Eric Murray, the youngest of his brothers, is determined to gain his rightful inheritance after thirteen years of bitter dispute with his father's family. Starting out alone to confront his tight-fisted kinsmen, he encounters a chestnut-haired beauty set upon by thieves. When she begs for Eric's protection for herself and her infant nephew, Eric promises to deliver them to the safety of her family. Bethia Drummond has tried desperately to ignore her attraction to the azure-eyed stranger. Still, Eric Murray is Bethia's only hope of escaping her ruthless kin who plan to kill her and her orphaned nephew, and claim their inherited land. Then Bethia learns that Eric, too, is seeking land and coin from his own kin-her family's closest allies. How could she love a man she might one day be forced to stand against? And yet she cannot ignore what her troubled heart knows-that this proud knight is her very destiny.
Also in This Series