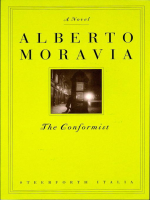 Secrecy and Silence are second nature to Marcello Clerici, the hero of The Conformist, a book which made Alberto Moravia one of the world's most read postwar writers. Clerici is a man with everything under control - a wife who loves him, colleagues who respect him, the hidden power that comes with his secret work for the Italian political police during the Mussolini years. But then he is assigned to kill his former professor, now in exile, to demonstrate his loyalty to the Fascist state, and falls in love with a strange, compelling woman; his life is torn open - and with it the corrupt heart of Fascism. Moravia equates the rise of Italian Fascism with the psychological needs of his protagonist for whom conformity becomes an obsession in a life that has included parental neglect, an oddly self-conscious desire to engage in cruel acts, and a type of male beauty which, to Clerici's great distress, other men find attractive.From the Trade Paperback edition.