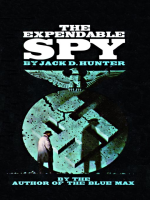 Description
Against the background of a deadly undercover war between the Gestapo and Soviet agents during the collapse of the Third Reich, The Expendable Spy is the hair-raising novel of an audacious American who discovers a secret so big and so appalling that his own intelligence office orders his execution.

Jack D. Hunter served in WWII in the War Department Intelligence Center as a counterespionage agent. As an undercover agent, he directed "Operation Nursery," the lengthy counterintelligence effort credited with thwarting the only known organized plot to perpetuate the Nazi system after Hitler's downfall.