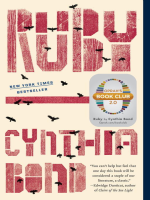 Description
"Ephram Jenkins has never forgotten the beautiful girl with the long braids running through the piney woods of Liberty, their small East Texas town. Young Ruby, "the kind of pretty it hurt to look at," is already quite damaged, but Ephram is forcibly drawn to her. As soon as she becomes a young woman and has any power of her own, Ruby flees suffocating Liberty for the bright pull of 1950s New York City. Years later, when a funeral forces her to return home, 30-year-old Ruby will find herself reliving the devastating violence of her girlhood. With the terrifying realization that she might not be strong enough to fight her way back out, Ruby struggles to survive her memories of the town's dark past. Meanwhile, Ephram must choose between loyalty to the sister who raised and stood by him and the chance for a life with the woman he has loved since he was a boy"--
Also in This Series