Once Upon a Winter's Eve »

Once Upon a Winter's Eve 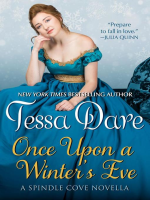 Some wallflowers bloom at night...

Violet Winterbottom is a quiet girl. She speaks six languages, but seldom raises her voice. She endured bitter heartbreak in perfect silence. The gentlemen aren't beating down her door.

Until the night of the Spindle Cove Christmas ball, when a mysterious stranger crashes into the ballroom and collapses at Violet's feet. His coarse attire and near-criminal good looks would put any sensible young lady on her guard. He's wet, chilled, bleeding, and speaking in an unfamiliar tongue.

Only Violet understands him. And she knows he's not what he seems.

She has one night to draw forth the secrets of this dangerously handsome rogue. Is he a smuggler? A fugitive? An enemy spy? She needs answers by sunrise, but her captive would rather seduce than confess. To learn his secrets, Violet must reveal hers—and open herself to adventure, passion, and the unthinkable...Love.

Warning: The heroine packs a pistol, the hero curses in multiple languages, and together they steam up a cold winter's night.