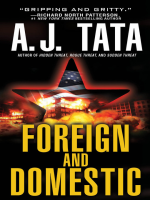 Barry Award Finalist: An ex-Delta Force leader aims to restore his honor—and take down the terrorist who stole it: "Absolutely fantastic . . . pulse-pounding." —Brad Thor, #1 New York Times bestselling author One year ago, Captain Jake Mahegan led a Delta Force team into Afghanistan to capture an American traitor working for the Taliban. The mission ended in tragedy. The team was infiltrated and decimated by a bomb. An enemy prisoner was killed. Mahegan was dismissed from service—dishonored forever. Now, haunted by the incident, Mahegan is determined to clear his name. The military wants him to stand down. But when the American Taliban returns to domestic soil—headed by the traitor who ruined his life—Mahegan is the only man who knows how to stop him. Outside the law. Under the radar. Out for vengeance . . . "Tata excels at jet-fueled action." —Publishers Weekly "I thoroughly enjoyed it . . . well done!" —President George Bush Brigadier General Tata donates a portion of his earnings to the USO Metro DC, the North Carolina Heroes Fund, and the Michael Murphy Foundation.