The Color of Death »

The Color of Death 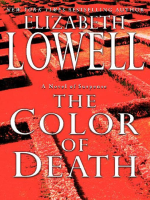 The name Elizabeth Lowell has become synonymous with electrifying fiction that seamlessly combines suspense, intrigue, and passion. And now the phenomenal New York Times bestselling author brilliantly displays her incomparable talents in a story of treachery, greed, conspiracy, and murder that will hold the reader spellbound until the final word.

It is the opportunity of a lifetime for Kate Chandler, the chance to cut seven rare, priceless sapphires and solidify her reputation as a world-class jewel cutter. But something goes horribly, tragically wrong during what should have been a simple transfer of goods. The sapphires vanish without a trace. Missing also is the man Kate trusted to transport the gems: her half brother, Lee, who now, quite possibly, is dead. And suddenly she is on the run, pursued by federal agents who suspect her of being the criminal mastermind of a cunning bait-and-switch scheme.

Special agent Sam Groves is one of the best of the best, an essential member of the FBI's elite crime strike force and the perfect man to lead the hunt, since he could never be scammed by a beautiful confidence woman. But something is troubling about this assignment, because someone else is chasing Kate Chandler as well.

Only Kate suspects the awful truth: She's unwittingly stumbled into a conspiracy of deceit, betrayal, and cold-blooded murder that goes far beyond a simple jewel heist. And a chilling, threatening voice on the telephone only confirms her worst suspicions. Getting Sam Groves, the FBI agent who's her constant shadow, to believe her is a step in the right direction -- but it may be one that's too little too late in a bloody game where terror dictates her every move and the rules are constantly changing. Because the order has already been passed down to a ruthlessly efficient assassin: Kate Chandler must not be allowed to live ...