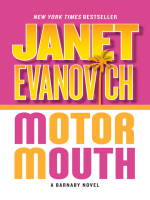 Description
Miami is still freakin' humid. The nights are even hotter. And there's a body on ice. And that's just the beginning of this adrenaline-rush of a hot-wired ride from phenomenal number one New York Times bestselling author Janet Evanovich. A woman with a taste for speed and a talent for breaking the rules, Barney also knows a little too much about cheating. First there was Hooker and that salesclerk. Now she's convinced one of the competitors is up to no good on the track. Snooping to find evidence, Hooker and Barney "borrow" a NASCAR hauler. Turns out, the hauler is carrying two race cars and a dead guy. It looks like Barney and Hooker are facing multiple counts of grand theft auto and homicide. So buckle up as Barney, Hooker, a 150-pound bundle of Saint Bernard love named Beans, and the Super Cigar Ladies Felicia and Rosa shift into gear on a wild race around South Florida and Concord, North Carolina. Everything you always wanted to know about righteous indignation, stealing an eighteen-wheeler, and sex in the fast lane.
Also in This Series