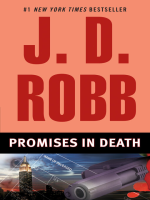 Description
Amarylis Coltraine had recently transferred to the New York City police force from Atlanta, but she's been a cop long enough to know how to defend herself against an assailant. When she's taken down just steps away from her apartment, disarmed, and killed with her own weapon, for Eve Dallas, the victim isn't just one of us.
Also in This Series