Walking Papers: The Accident that Changed My Life, and the Business that Got Me Back on My Feet 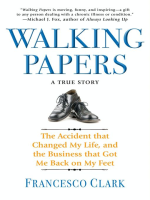 Walking Papers is the incredibly inspiring story of a young man who wouldn't give up. Francesco Clark was a twenty-four-year-old with a bright future when he went to Long Island for the weekend—but a nocturnal dive into the pool's shallow end changed everything, forever. Paralyzed from the neck down, Francesco was told by his doctors that he would never move from his bed or even breathe without assistance. But Francesco fought back. Within days, he was breathing on his own. His father, a doctor himself, investigated every opportunity for experimental treatment, and Francesco used every resource available to speed his recovery. To avoid having his lungs painfully suctioned, he sang, loudly, for hours—and that was just the beginning.

Francesco moved back home with his parents and began the long process toward recovery. Many doctors discourage patients with spinal cord injury from pursuing physical therapy beyond very basic movements, but Francesco embarked on a five-hour daily regimen, including the treadmill program that Christopher Reeve had made famous. Soon he astounded the medical establishment with his progress.

Francesco's accident also left him unable to sweat out toxins, leaving his complexion poor. He and his father began to experiment, and the Clark's Botanicals skin-care line was born. Now CB products are sold worldwide in stores such as Saks Fifth Avenue, and the company has won many major fashion awards and is enjoyed by a host of celebrities. The lessons Francesco learned about persistence from his recovery process, and the loving support of his amazing family, have both contributed to his incredible business success.

Seven years after the accident, Francesco continues to improve and to surprise his doctors—for instance, he can now work on a computer. Walking Papers is the inspiring story of how, with individual determination and unconditional family support, Francesco Clark overcame extreme adversity and achieved an extraordinary triumph. Praise for Walking Papers by Francesco Clark

"Walking Papers so beautifully illuminates the tenacity of the human spirit and the desire to choose hope in the face of overwhelming odds. Francesco's fresh, engrossing book proves that a disability or diagnosis is not a death sentence, but a life sentence. His journey so aptly illustrates that there is life after devastation and trauma. I found myself cheering him from every page."—Lee Woodruff, coauthor, In an Instant

"Francesco Clark's personal journey is an inspiration to everyone. His triumph and achievements over adversity reflect the determination and faith of the human spirit."—John Demsey, president, Este Lauder

"I read Francesco Clark's Walking Papers when I should have been working, and was immediately swept into his story of crisis and hope. His doctors, his nurses, friends, and family all try to protect him from false hope. But Francesco's will is irrepressible and potent. His story is the triumph of optimism in the face of daunting, heartbreaking hopelessness."—Linda Wells, editor in chief, Allure