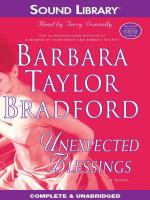 The new blockbuster from one of the world's greatest storytellers delves into the life of Emma Harte—the original Woman of Substance--and the ambitious, passionate, and volatile women of the next generations.

Evan, Tessa, Linnet, and India: four remarkable women. Three generations of Hartes. One indomitable family whose loyalty binds them together and whose enemies want to tear them apart.

Evan Hughes, Emma's American great-granddaughter, is trying to integrate into the powerful Harte family. She is caught between her estranged parents, her new family, and her new love. But a dangerous enemy hovers in the background.

Tessa Longden, Evan's cousin, is battling her husband for custody of their daughter, Adele. When Adele suddenly goes missing, Tessa is forced to seek help from her half-sister Linnet-a woman who has been her rival all their lives.

Linnet, the most brilliant businesswoman of the four great-granddaughters, is desperately trying to show that she is the natural heir to her mother, Paula. But her glittering future at the helm of the vast Harte empire means many sacrifices, perhaps even the loss of her sister's fragile trust.

And India Standish, the traditionalist in the family, falls in love with a famous British artist from a working-class background. Madly in love, India is determined to marry him, no matter what her family thinks.

It is Evan who finds new perspective about her own life from the revelations in letters that Emma wrote to Evan's grandmother decades ago. But they may come too late....

As conflict and danger swirl around the Harte women, someone is pulling the strings to make sure none of them finds happiness. Who among them will rise to the challenges as only a true Harte can do? This latest dramatic story in the ongoing saga of an extraordinary family dynasty is full of love, passion, jealousy, and ambition. It is Barbara Taylor Bradford at her inimitable best.