To Love a Highlander »

To Love a Highlander 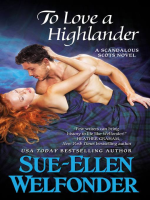 For fans of New York Times bestselling authors Sabrina Jeffries, Cathy Maxwell, and Karen Hawkins...A TEMPTING PROPOSITIONAs one of the bastards born to the Stirling court, Sorley the Hawk has never known his mother or father. It's a burning quest he has devoted himself to uncovering at any cost. But as a roguish warrior who serves at the pleasure of the King, his prowess-both on the battlefield and in his bedchamber-is legendary. So when a flame-haired Highland lass sneaks into his quarters with a tantalizing proposition, he can't resist taking her up on her offer . . . AN UNQUENCHABLE DESIRELady Mirabelle MacLaren will do anything to keep from marrying her odious suitor, even sully her own good name. And who better to despoil her than his sworn enemy, the one they call "Hawk?" As they set about the enjoyable task of ruining her reputation, Hawk and Mirabelle soon learn that rebellion never tasted so sweet.(95,000 words)