Honeymoon in Tehran: Two Years of Love and Danger in Iran 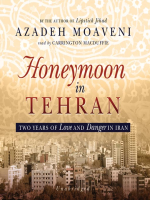 Azadeh Moaveni was an American reporter in Tehran in 2005 covering the rise of Mahmoud Ahmadinejad, the new president of Iran, when the unexpected happened—she met her soul mate, fell in love, and became pregnant. Facing an uncertain future, she continues to publish increasingly sensitive reports on Iran in Time magazine, while hiding her pregnancy from the religious authorities until she could marry. Shortly after giving birth a government source—her minder known mysteriously as Mr. X—tells her she is the subject of an investigation and will soon be arrested and sent to the notorious Evin prison. It becomes evident she is being spied on: cars tracing her, her phone tapped, her email monitored. Fearing for her safety—and that of her young family—Moaveni flees Iran in 2007, leaving the country she had hoped to help through her journalism.

This is a powerful, poignant, often funny, and ultimately harrowing story about a young woman facing her future in a very dangerous place.