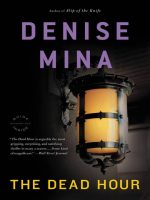 Description
Paddy Meehan returns in the "vividly tense tale" (Entertainment Weekly) by the author of the Reese Witherspoon x Hello Sunshine book club pick Conviction. When journalist Paddy Meehan investigates a domestic dispute, the well-dressed man who answers the door assures her the blonde in the shadows behind him is fine, and slips her money before he closes the door. In fact, the woman was tortured and left to die later that night, and Paddy has only days to uncover the truth before the newspaper learns of her bribe and the police close the case for reasons of their own.

Only Paddy cares enough to pursue a dark and brutal story that could make her career-or kill her, in a novel that proves why Denise Mina is "some kind of magnificent" (Wall Street Journal)."Brutally funny." —People "In all her insecurity, Paddy is achingly real...Mina's note-perfect writing captures Paddy's voice dead-on." —Boston Globe"A gloriously visceral style...Mina excels at narrative and social commentary." —Newsday