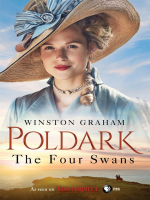 In The Four Swans, the sixth book in Winston Graham's legendary Poldark saga, Ross is faced with a new battlefield, one involving the women whose lives are intertwined in his own.

Cornwall, 1795-1799: although Ross Poldark, now something of a war hero, seems secure in his hard-won prosperity, a new dilemma faces him in the sudden infatuation of a young naval officer for his wife Demelza. All four women—the four swans—whose lives touch Ross's, face a crisis in these years. For his wife Demelza, his old love Elizabeth, for his friend's new wife Caroline, and for the unhappy Morwenna Chynoweth, these are times of stress and conflict.