The Book of Evidence »

The Book of Evidence 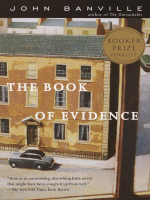 Description
John Banville’s stunning powers of mimicry are brilliantly on display in this engrossing novel, the darkly compelling confession of an improbable murderer.

Freddie Montgomery is a highly cultured man, a husband and father living the life of a dissolute exile on a Mediterranean island. When a debt comes due and his wife and child are held as collateral, he returns to Ireland to secure funds. That pursuit leads to murder. And here is his attempt to present evidence, not of his innocence, but of his life, of the events that lead to the murder he committed because he could. Like a hero out of Nabokov or Camus, Montgomery is a chillingly articulate, self-aware, and amoral being, whose humanity is painfully on display.
Also in This Series