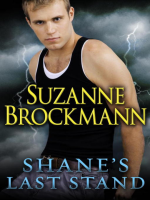 Meet Shane Laughlin, the hero of bestselling author Suzanne Brockmann's new novel Born to Darkness, in a special eBook short story about his final mission as an officer with SEAL Team Thirteen--the mission that strips him of his command, earns him a dishonorable discharge, and leaves him blacklisted and unlikely to find work in the darkly futuristic world of the mid-twenty-first century. The assignment seems simple enough: insert into a dangerous, war-torn country and take out a deadly terrorist. But from the moment that Shane injures his ankle in what should have been a routine parachute landing, it's clear that Murphy's Law--whatever can go wrong, will go wrong--is in effect. And sure enough, the situation goes from bad to worse, until Shane faces what seems like the ultimate no-win scenario. In his quest to save both an innocent woman and the SEALs under his command, he's willing to put himself in harm's way, risking everything he's worked for--his career, and even his life.Includes a preview of Suzanne Brockmann's hotly anticipated novel of romantic suspense, Born to Darkness!