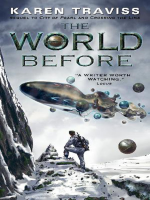 Now one of the sentient species
has been exterminated—and two others
are poised on the brink of war.

The fragile bezeri are no more, due to the ignorant, desperate actions of human interlopers. The powerful wess'har protectors have failed in their sworn obligation to the destroyed native population—and the outrage must be redressed.

But those who are coming to judge from the World Before — the home planet, now distant and alien to the wess'har, whose ancestors left there generations ago — will not restrict their justice to the individual humans responsible for the slaughter. Earth itself must answer for the genocide. And its ultimate fate may depend on a dead woman: former police officer Shan Frankland, who became something far greater than human before destroying herself in the vast airless depths of space.