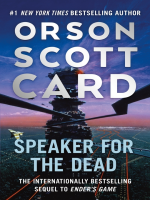 In the aftermath of his terrible war, Ender Wiggin disappeared, and a powerful voice arose: The Speaker for the Dead, who told the true story of the Bugger War.
Now, long years later, a second alien race has been discovered, but again the aliens' ways are strange and frightening...again, humans die. And it is only the Speaker for the Dead, who is also Ender Wiggin the Xenocide, who has the courage to confront the mystery...and the truth.
Speaker

3) Xenocide
Author:
Card, Orson Scott
Series Volume:
3.
Choose a Format
+ Book
Show Edition
On Shelf
Broadneck Library - Paperback Fiction
SF (C)
Place Hold
Description:
Click to view
The Starways Congress decides that the deadly virus on Lusitania must be wiped out and sends a fleet to destroy it. After the fleet disappears, Gloriously Bright, the most brilliant mind in a world of people bred for superintelligence, is selected to solve the mystery. Afraid that the descolada--the deadly virus that the pequininos require to transform themselves into adults--may escape the confines of Lusitania, the Starways Congress order the destruction...
More Info
SHARE

4)  Children of the mind
Author:
Card, Orson Scott
Series Volume:
4.
Choose a Format
The library does not own any copies of this title.

5)  A war of gifts: an Ender story
Author:
Card, Orson Scott
Series Volume:
5.
Choose a Format
The library does not own any copies of this title. 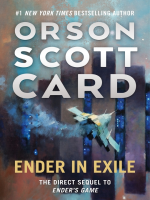 After twenty-three years, Orson Scott Card returns to his acclaimed best-selling series with the first true, direct sequel to the classic Ender's Game.
In Ender's Game, the world's most gifted children were taken from their families and sent to an elite training school. At Battle School, they learned combat, strategy, and secret intelligence to fight a dangerous war on behalf of those left on Earth. But they also learned some important

7)  The last shadow
Author:
Card, Orson Scott
Series Volume:
7.
Choose a Format
The library does not own any copies of this title.

8)  First meetings in the Enderverse
Author:
Card, Orson Scott
Choose a Format
The library does not own any copies of this title.
CONNECT WITH US