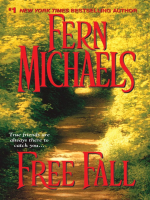 Sooner or later, the Sisterhood always gets their man . . . The loyal friends who make up the Sisterhood have gathered at Myra Rutledge's beautiful Virginia home for the first time in a year, eager to talk, laugh, and share their joys and heartaches. For one of their number, it's an evening filled with anticipation. Because tonight, over delicious food and in the company of those she trusts most, it will finally be time to tell her story—and for the Sisterhood to help plan her revenge. Yoko Akia's mother was only fifteen when a wealthy man swept her off her feet with promises of love. Instead, he filled her brief life with horror and misery. The Sisterhood has helped each other exact vengeance on rotten men before, but this time it's different. Their target is none other than America's favorite movie star—a brute who has conned the world into believing he's Mister Perfect. But he's about to learn that nobody—not even a powerful superstar—is above the Sisterhood's special brand of payback . . .

"Spunky women who fight for truth, justice, and the American way."—Fresh Fiction on Final Justice

"Readers will enjoy seeing what happens when well-funded, very angry women take the law into their own hands."—Booklist on Weekend Warriors "Delectable . . . deliver[s] revenge that's creatively swift and sweet, Michaels-style."—Publishers Weekly on Hokus Pokus
Also in This Series