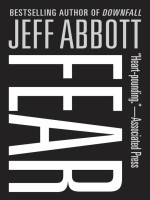 Description
What if you could forget the worst moment of your life? Miles Kendrick is a federal witness hiding from the mob, constantly haunted by the horrifying memories of his best friends death. While helping his psychiatrist with a mysterious favor, Miles stumbles into a murderand an illegal medical research program that could free him and millions of others with post-traumatic stress disorder from their crippling fears. In the wrong place at the wrong time, Miles ends up in the cross-hairs of Dennis Groote, an ex-FBI agent turned hitman. Groote is determined to find a cure for his traumatized daughterand to gain control of a secret drug formula worth billions on the open market, a formula he believes Miles possesses.Pursued by both Groote and government agents, Miles runs for his life. He draws on his old skills as a mobsters spy to survive a deadly duel of strike and counterstrike with the unrelenting and brutal Groote. Miles finds two unlikely allies: a mentally broken ex- soldier and a reclusive woman whose life was destroyed by violence. To save them all and with one last chance to be the man he once wasMiles takes the battle back to the powerful, murderous forces who want to silence one troubled man before he can get his life back. . . BACKCOVER: Fans of Harlan Coben, Lee Child, Joseph Finder, or John Grishamanyone who enjoys a wild ride on a bumpy roadcan cheer the arrival of our latest master of the fine art of the page-turner. Booklist(starred review)
Also in This Series