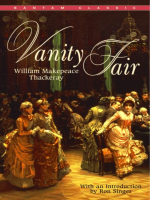 "Which of us is happy in this world? Which of us has his desire? or, having it, is satisfied?"

Generally considered to be Thackeray's masterpiece, Vanity Fair is a resplendent social satire that exposes the greed and corruption raging in England during the turmoil of the Napoleonic wars. Subtitled A Novel without a Hero, it traces the changing fortunes of two unforgettable women: the scheming opportunist Becky Sharp--one of literature's most resourceful, engaging, and amoral heroines--and her foil, the faithful but naïve Amelia Sedley. Amid the swirl of London's posh ballrooms and affairs of love and war, their fortunes rise and fall. Thackeray's subversive, comic attack on the hypocrisy and "dismal roguery" of an avaricious world still resonates, more than 150 years later, with implications for our own times.