Death of a maid »

Death of a maid 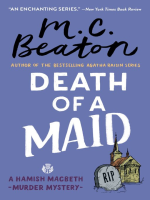 Description
Armed with a bucket and mop, Mrs. Gillespie brings misery into the quiet life of Hamish Macbeth when he wins her maid services in a church raffle. He fears she's more likely to snoop than clean, since rumor has it that she damages more items than she dusts. Yet Macbeth has more upsetting issues to ponder-his former girlfriend, reporter Elspeth Grant, is back in the village for a holiday with her new boyfriend. Then he gets notice that a TV crew plans a documentary on him. Its airing is sure to get him a promotion and transfer to the city-and Hamish Macbeth would rather be boiled in oil than leave the serenity of Lochdubh. Though lately Macbeth's seeing the squabbling of seagulls and feeling an ill wind coming. Sure enough, Mrs. Gillespie is soon found dead under suspicious circumstances. And as he investigates the case, Elspeth's presence torments the red-haired bobby and drives him to foolish antics. But what should really preoccupy Macbeth are the town's hidden secrets-ones that will force a killer to lash out in deadly, irrevocable acts¿
Also in This Series