A widow for one year »

A widow for one year: a novel 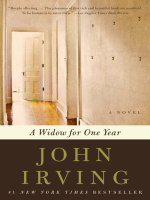 Description
“A Widow For One Year will appeal to readers  who like old-fashioned storytelling mixed with modern sensitivities. . . . Irving is among the few novelists who can write a novel about grief and fill it with ribald humor soaked in irony.”—USA TodayIn A Widow for One Year, we follow Ruth Cole through three of the most pivotal times in her life: from her girlhood on Long Island (in the summer of 1958) through the fall of 1990 (when she is an unmarried woman whose personal life is not nearly as successful as her literary career), and at last in the autumn of 1995, when Ruth is a forty-one-year-old widow and mother (and she’s about to fall in love for the first time). Both elegiac and sensual, A Widow for One Year is a multilayered love story of astonishing emotional force.Praise for A Widow for One Year“Compelling . . . By turns antic and moving, lusty and tragic, A Widow for One Year is bursting with memorable moments. . . . A testament to one of life’s most difficult lessons: In the end, you just have to find a way to keep going.”—San Francisco Examiner-Chronicle“A sprawling 19th-century production, chock full of bizarre coincidences, multiple plot lines, lengthy digressions, and stories within stories. . . . An engaging and often affecting fable, a fairy tale that manages to be old-fashioned and modern all at once.”—The New York Times“[Irving’s] characters can beguile us onto thin ice and persuade us to dance there. His instinctive mark is the moral choice stripped bare, and his aim is impressive. What’s more, there’s hardly a writer alive who can match his control of the omniscient point of view.”—The Washington Post Book World“In the sprawling, deeply felt A Widow for One Year, John Irving has delivered his best novel since The World According to Garp. . . . Like a warm bath, it’s a great pleasure to immerse yourself in.”—Entertainment Weekly“John Irving is arguably the American Balzac, or perhaps our Dickens—a rip-roaring storyteller whose intricate plot machinery is propelled by good old-fashioned greed, foolishness and passion.”—The Nation“Powerful . . . a masterpiece.”—St. Louis Post-Dispatch
Also in This Series