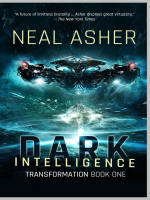 Description
One man will transcend death to seek vengeance. One woman will transform herself to gain power. And no one will emerge unscathed... Thorvald Spear wakes in a hospital to find he's been brought back from the dead. What's more, he died in a human vs. alien war that ended a century ago. Spear had been trapped on a world surrounded by hostile Prador forces, but Penny Royal, the AI inside the rescue ship sent to provide backup, turned rogue, annihilating friendly forces in a frenzy of destruction and killing Spear. One hundred years later the AI is still on the loose, and Spear vows for revenge at any cost. Isobel Satomi ran a successful crime syndicate, but after competitors attacked she needed power and protection. Negotiating with Penny Royal, she got more than she bargained for: Turning part-AI herself gave Isobel frightening power, but the upgrades hid a horrifying secret, and the dark AI triggered a transformation that has been turning her into something far from human... Spear hires Isobel to track Penny Royal across worlds to its last known whereabouts. But he cheats her in the process and quickly finds himself in her crosshairs. As Isobel continues to evolve into a monstrous predator, it's clear her rage will eventually win out over reason. Will Spear finish his hunt before he himself becomes the hunted? Dark Intelligence is the explosive first novel in a brand new trilogy from military SF master Neal Asher and a new chapter in his epic Polity universe. Skyhorse Publishing, under our Night Shade and Talos imprints, is proud to publish a broad range of titles for readers interested in science fiction (space opera, time travel, hard SF, alien invasion, near-future dystopia), fantasy (grimdark, sword and sorcery, contemporary urban fantasy, steampunk, alternative history), and horror (zombies, vampires, and the occult and supernatural), and much more. While not every title we publish becomes a New York Times bestseller, a national bestseller, or a Hugo or Nebula award-winner, we are committed to publishing quality books from a diverse group of authors.
Also in This Series