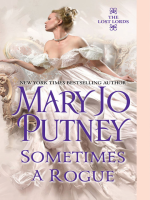 Description
The very well bred Miss Sarah Clarke-Townsend has always quietly yearned for adventure, but she gets more than she bargained for when an impulsive act of courage saves her pregnant twin, but puts her own life at risk. If the kidnappers after her sister discover they've abducted Sarah instead, she will surely pay with her life. Rob Carmichael survived his disastrous family by turning his back on his heritage and becoming a formidable Bow Street Runner with a passion for justice and a talent for rescuing damsels in distress. When he discovers that the sister-in-law of his friend the Duke of Ashton has been abducted, he swiftly follows the kidnappers to Ireland. After Rob rescues Sarah, they undertake a hazardous escape. As they dodge their pursuers, Rob discovers that his companion is as intrepid as she is sunny, and Sarah finds a man who is as trustworthy as he is dangerous. But when they reach England, Rob's past reaches out to seize him in a shocking way, and the fearsome Bow Street Runner may not survive without the aid of a graceful golden lady.
Also in This Series