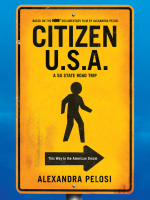 The stories, interviews, and pictures behind the acclaimed HBO® documentary by Emmy® Award winner Alexandra Pelosi TAKE A NATIONWIDE ROAD TRIP WITH AN AWARD-WINNING FILMMAKER AND AMERICA'S NEWEST CITIZENS. Buddhist monks, homosexuals, scientists with PhDs, cancer patients, Obama haters, Obama lovers, Muslim imams, Christian missionaries, tech geniuses, movie directors, and a wrestler with is own action figure . . . American welcomes all types Whether they arrived via online dating, adoption, political asylum, student and work visas-or swimming the Rio Grande and staying long enough to be granted amnesty-they all came here to live the American dream. In this companion to her HBO documentary, Emmy® Award-winning filmmaker Alexandra Pelosi journeys to naturalization ceremonies in all fifty states to bring us the wide-ranging personal stories of men and women from around the globe who saw the hope and promise of our nation in the distance and set out on the journey-no matter how long, arduous, or even dangerous-to make their own American dreams come true. And although they are no longer visitors, our newest citizens still look at American with an outsider's perspective; they hold up a mirror to show us how we look as a nation-and, even in a time when unemployment and poverty plague us, how much we can take for granted. Includes Color Photographs Throughout