All These Condemned: A Novel 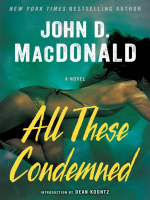 Description
A television star wilting under the limelight. An adman with a stiff upper lip. A rising New York artist. A desperate housewife. All are victims of a cruel puppet master—and one of them is a killer.
Introduction by Dean Koontz
The head of a global cosmetics empire, Wilma Ferris became a self-made success by taking everything people had to give—and more. Mixing business with pleasure is her standard operating procedure. And she’s playing the same game when she invites eight of her closest friends—all of whom owe their livelihoods to Wilma—to a weekend party at her lake house.

After a late-night skinny-dipping session turns into a frantic search for the missing host, it becomes apparent that one of the guests had seen enough. Wilma’s body is pulled from the cold water, but the cause of death isn’t drowning—it’s a blow to the head. Was it a crime of passion or premeditated murder? Neither would surprise any of Wilma’s guests. Each of them has a motive—or two. In the end, all will be condemned.
Praise for John D. MacDonald
“John D. MacDonald created a staggering quantity of wonderful books, each rich with characterization, suspense, and an almost intoxicating sense of place.”—Jonathan Kellerman
“John D. MacDonald is a shining example for all of us in the field. Talk about the best.”—Mary Higgins Clark
“My favorite novelist of all time.”—Dean Koontz
Also in This Series