Wish You Were Here »

Wish You Were Here 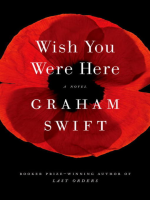 Description
From the prizewinning author of the acclaimed Last Orders, The Light of Day, and Waterland, a powerfully moving new novel set in present-day England, but against the background of a global "war on terror" and about things that touch our human core.

On an autumn day in 2006, on the Isle of Wight, Jack Luxton—once a farmer, now the proprietor of a seaside caravan park—receives the news that his brother Tom, not seen for years, has been killed in combat in Iraq. The news will have its far-reaching effects for Jack and his wife, Ellie, and compel Jack to make a crucial journey: to receive his brother's remains, but also to return to the land of his past and of his most secret, troubling memories. A gripping, hauntingly intimate, and compassionate story that moves toward a fiercely suspenseful climax, Wish You Were Here translates the stuff of headlines into heartwrenching personal truth.

This eBook edition includes a Reading Group Guide.
Also in This Series