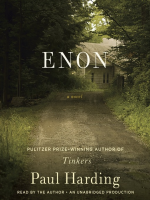 Description
NAMED ONE OF THE BEST NOVELS OF THE YEAR BY"The Wall Street Journal - "American Library Association" - Kirkus Reviews" A stunning allegorical novel about one man's enduring love for his daughter Hailed as "a masterpiece" (NPR), "Tinkers, "Paul Harding's Pulitzer Prize-winning debut, is a modern classic. "The Dallas Morning News" observed that "like Faulkner, Harding never shies away from describing what seems impossible to put into words." Here, in "Enon, " Harding follows a year in the life of Charlie Crosby as he tries to come to terms with a shattering personal tragedy. Grandson of George Crosby (the protagonist of "Tinkers"), Charlie inhabits the same dynamic landscape of New England, its seasons mirroring his turbulent emotional odyssey. Along the way, Charlie's encounters are brought to life by his wit, his insights into history, and his yearning to understand the big questions. A stunning mosaic of human experience, "Enon" affirms Paul Harding as one of the most gifted and profound writers of his generation. Praise for "Enon" "Harding conveys the common but powerful bond of parental love with devastating accuracy. . . . He] is a major voice in American fiction."--"Chicago Tribune " "Paul Harding's novel "Tinkers "won the Pulitzer Prize; its stunning successor, "Enon, "only raises the bar."--"O: The Oprah Magazine" "Extraordinary . . . a darkly intoxicating read . . . Harding's] prose is steeped in a visionary, transcendentalist tradition that echoes Blake, Rilke, Emerson, and Thoreau."--"The New Yorker"" " "So wild and riveting it's practically an aria . . . Harding is a superb stylist."--"Entertainment Weekly" " Charlie's grief], shaped by a gifted writer's caressing attention, can bring about moments of what Charlie calls 'brokenhearted joy.'"--"The Wall Street Journal"" " "Astonishing . . . a work of fiction that feels authentic as memoir."--"Financial Times" "Read "Enon" to live longer in the harsh, gorgeous atmosphere that Paul Harding has created."--"San Francisco Chronicle"
Also in This Series