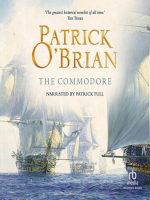 This is the seventeenth novel in the bestselling Aubrey-Maturin series of naval tales, which the New York Times Book Review has described as "the best historical novels ever written."

Having survived a long, desperate adventure in the Great South Sea, Captain Jack Aubrey and Stephen Maturin return to England to very different circumstances. For Jack it is a happy homecoming, at least initially, but for Stephen it's disastrous. His little daughter appears to be autistic, incapable of speech or contact, while his wife, Diana, unable to bear this situation, has disappeared. The child has been left in the care of the widowed Clarissa Oakes.

Much of the story takes place on land, but the roar of the great guns is never far. Soon Aubrey and Maturin are sent on a bizarre decoy mission to the fever-ridden lagoons of the Gulf of Guinea to suppress the slave trade. But their ultimate destination is Ireland, where the French are mounting an invasion that will test Aubrey's seamanship and Maturin's resourcefulness as a secret intelligence agent. The climax of the story is one of those grand, thrilling fleet actions on which the British Navy's supremacy was founded.

The subtle interweaving of the disparate themes in this wonderfully wrought novel is an achievement of pure storytelling by one of our greatest novelists.