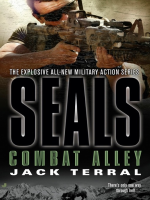 Description
They are America's ultimate weapon in the war on terror. On the sea, in the air, or over land, they go where no one else will go, and do what no one else can do.
In Afghanistan, a native CIA contact is in trouble. Claiming to have detailed knowledge of anti-American insurgent operations, he wants to defect to the US in return for the intelligence he can supply. But time is short, and the risk is high.

William "Wild Bill" Brannigan and his newly-formed SEAL platoon are called in for the difficult and dangerous mission. According to plan, they night-jump into the lawless Afghan desert and make their way to the rendezvous point.

Then things stop going according to plan.
Also in This Series