I feel like going on: life, game, and glory 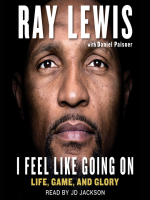 Description
The legendary Baltimore Ravens linebacker assesses the state of football while recounting his troubled youth, his rise to athletic fame, and the allegations that threatened his NFL career.
Lewis, Baltimore Ravens linebacker and one of the greatest defensive players of his generation, holds nothing back on the state of football as well as his troubled childhood, his rise to athletic greatness, the storm that threatened to ruin his NFL career, and the devastating injury that nearly cost him a final moment of glory. Mostly, he tells how heartbreak can sometimes lift you to greatness and glory-- if you find a way to put your focus in faith, and faith in your focus.
Also in This Series