A world without you »

A world without you 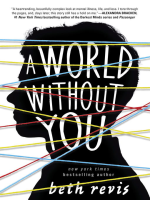 Description
Seventeen-year-old Bo has always had delusions that he can travel through time. So when his worried parents send him to a school for troubled youth, Bo assumes that he's actually attending Berkshire Academy, a school for kids who, like Bo, have 'superpowers'. At the Academy, Bo falls in love with Sofia, who helps Bo open up in a way he never has before. In turn, Bo provides comfort to Sofia, who lost her mother and two sisters at a very young age. But Sofia, unable to overcome her depression, commits suicide, leaving Bo convinced that she's not dead but is stuck somewhere in the past. Determined to save her, Bo comes to realize that his choice lies between facing his demons head-on or succumbing to a psychosis that will let him be with the girl he loves. --
Also in This Series