A Morning for Flamingos »

A Morning for Flamingos 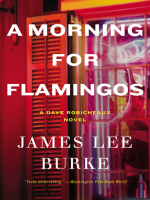 Description
A cajun cop infiltrates the mob...but is he too close?
A Morning for Flamingos is a classic Dave Robicheaux Louisiana mystery by New York Times-bestselling author James Lee Burke.
Clutching the shards, of his shattered life, Cajun detective Dave Robicheaux has rejoined the New lberia police force.
His partner is dead—slain during a condemned prisoner's bloody flight to freedom that left Robicheaux critically wounded and reawakened the ghost of his haunted, violent past.
Following the trail of the escaped convicts, Robicheaux is soon drawn back to New Orleans. But this time, the stakes are even higher. He's working for the DEA undercover in an attempt to incriminate Tony Cardo, a clinically insane drug lord. But all Robicheaux's really got is revenge on the mind. And he'll only be satisfied when the killers who upended his life have been brought to justice.
Also in This Series