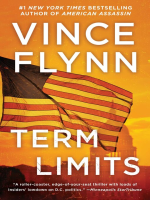 Description
#1 New York Times bestselling author of American Assassin—soon to be a major motion pictureTaking America back...one politician at a time TERM LIMITS In one bloody night, three of Washington's most powerful politicians are executed with surgical precision. Their assassins then deliver a shocking ultimatum to the American government: set aside partisan politics and restore power to the people. No one, they warn, is out of their reach — not even the president. A joint FBI-CIA task force reveals the killers are elite military commandos, but no one knows exactly who they are or when they will strike next. Only Michael O'Rourke, a former U.S. Marine and freshman congressman, holds a clue to the violence: a haunting incident in his own past with explosive implications for his country's future.... "Ingenious....Outpaces anything recently published, including Baldacci and Clancy." — Florida Times-Union Includes an excerpt from Memorial Day, Vince Flynn's electrifying new hardcover
Also in This Series